Been thinking a little bit about the concept of “belief” lately.  Loosely related, I thought this post was interesting.  Here are some excerpts to entice you to read it (bolding mine):

We [Jewish people] face the now-universal injunction for those who consider themselves “religious” (there has never been such a thing on the face of this Earth before Christianity; Christianity is the first and the last ‘religion’) of “but do I really believe in G-d?” This injunction, this “test of faith” is part and parcel to a Christian mode of subjectivity which has made the (simultaneous) production of, and disavowal of doubt–the challenge of “true faith” versus “hypocrisy”, “heresy”, and “unbelief” which together form the Christian problematic–an integral part of religious experience.

It is significant that seldom in Jewish history have we drawn lines around the ‘community of believers’ in contradistinction to the apostates and the heretics. If anything, we only ever condemned those who refuse the work, a term in Hebrew (avodah) which has nothing to do with our capitalist understanding of labor but instead refers to the act of bringing about that which underlies and redeems the world, of performing mitzvot (commandments), of tzedek, tzedek tirdof (“Justice, justice you shall pursue,” Deut. 16:20). As our sages said, “It is not your responsibility to finish the work [of perfecting the world], but you are not free to desist from it either” (Rabbi Tarfun, Pirkei Avot 2:16).

Ignore rolequeer (the url)’s input because lol they’re not wrong, they’re just missing the point.  I’m linking more for that last comment because it’s… a trip.

END_OF_DOCUMENT_TOKEN_TO_BE_REPLACED

The copilot asked me to write more about this.

END_OF_DOCUMENT_TOKEN_TO_BE_REPLACED

Where are all the jokes about “godful communists”?  I expected a Google search to turn up more results than this.

4 Comments   |  tags: christian, communism, everyone should be making this joke! get on it folks!, theism | posted in Just Religion

END_OF_DOCUMENT_TOKEN_TO_BE_REPLACED

8 Comments   |  tags: abuse, christian, god, I'mmmmm not sure about leaving comments open but I hate closing the comment section so it's tentatively open for now, invalidation, theism, validation | posted in Just Religion

“The Universe” as Diet Theism

Today, on “The Blogger Takes Things More Seriously Than They Were Probably Intended”: let’s talk about when people make reference to the universe as some kind of sentient, powerful entity with a will of its own and the ability to make choices.

END_OF_DOCUMENT_TOKEN_TO_BE_REPLACED

11 Comments   |  tags: agnosticism, atheism, I get that it's supposed to be melodramtic in some cases but also. what kind of sense does that make., religion, spirituality, the universe, theism | posted in Just Religion

A continuation of the previous post, which discussed the idea that God is pangender.

Even though nobody’s changing my mind, I decided to go looking for whatever else has been put forth on the matter and came across this quaint little blather which I started to skim over before stopping at the following quote: END_OF_DOCUMENT_TOKEN_TO_BE_REPLACED

The Gender of God

I haven’t seen a lot of discussion on this topic before.  All that stands out in my memory is a moment from many years ago, when a girl commented to me, in the form of a question, her dissatisfaction with the use of masculine pronouns to refer to God.  I will concede that calling God a “He” may not be optimal, but at the time all I could think of to say was that it’s better than calling Him an “It”. END_OF_DOCUMENT_TOKEN_TO_BE_REPLACED

Friendly reminder that if one more person compares asexuality to atheism, I’m going to explode.

It’s bad enough to have a sexual orientation likened to an ideological belief, but the worst part is that in the midst of these comparisons, atheism has at least once been defined as a “lack of religion”. 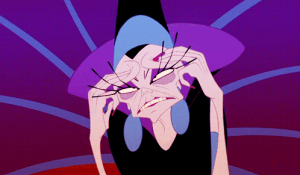 END_OF_DOCUMENT_TOKEN_TO_BE_REPLACED

11 Comments   |  tags: asexuality, pet peeves, religion, starts out angry and ends with me laughing at myself, the story of this blog, theism, words | posted in Asexuality & Religion, Asexuality Talk

Problems Particular to being a Religious Gray-Asexual

Summarizing my ideology for the purposes of this post is difficult because, despite fitting the technical definition, I’m reluctant to label myself a “Christian” and leave it at that.  Even though I can’t ever really distance myself from them, I’m leery of other White Chirstians and their common practices, with their White Jesus and their clumsy rhetoric and their unwillingness to tackle the subject of systematic oppression and their overall lack of — as Anton Ego would term it — perspective.

Am I any better than them?  I dunno, probably not.  But you can’t convince me that labels aren’t about community to some degree.  So already I have a problem before we even get into the fact that I’m not heterosexual. END_OF_DOCUMENT_TOKEN_TO_BE_REPLACED